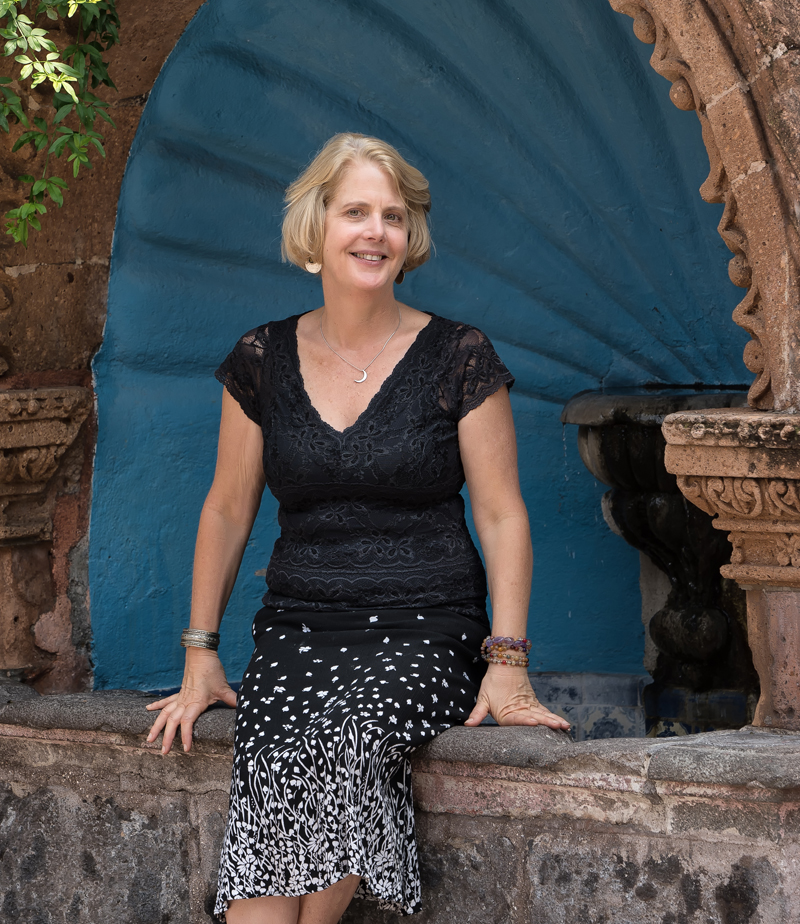 Hi, I’m Sarah. I’m in the business of resuscitating your dreams.

I am on a mission to unleash the radiance of women at midlife and beyond.

To connect us all with our with our innate brilliance and power. And with our Divine Feminine Essence.

From this place of connection, anything becomes possible!

I’ve spent the last three and a half decades immersed in the natural healing world, and my biggest passion is healing ourselves from the INSIDE OUT.

I work with a variety of life coaching skills and tools, including Law of Attraction, EFT Tapping and Matrix Reimprinting.

Change and transformation IS possible! I’m here to prove it.

Since my mid-forties I’ve been reinventing myself, and transforming my relationship with—well, everything in my life. But most importantly, with MYSELF.

When my body started morphing in my mid-fifties I felt flummoxed and confused for the first few years. It was hard to love the changes that seemed out of my control.

But about a year ago, I decided that it was high time to put my own knowledge and tools into practice and transform my relationship to my body—and my body itself!

Since then I’ve lost more than 25 pounds, regained energy and vitality that I hadn’t experienced in a long while, and recovered my excellent health.

Now I’m inspired to support women on a similar journey of transforming their relationship to their bodies and themselves!

Right now I live in San Miguel de Allende, a beautiful world heritage city tucked into the central highlands of Mexico. A few short years ago, I’d never have believed it possible I could actually live here— learning a new language, , surrounded by culture, color, new friends, ….That sort of life seemed like a faraway dream.

And yet—here I am! Living proof that anything is possible even
—and especially—in the second half of life!

Sarah brings a warmth, genuineness, and care to coaching. I felt a sincerity, and a room for depth, and openness that I really valued in each session. She does a great job of listening, and trying to tune into what the client is bringing forward and she brings a grounded, thoughtful, accessible way of relating.

I particularly liked the way her sessions were holistic, spiritually receptive, and worked with creative exercises. Because Sarah was so open, interested, perceptive, and non-judgmental, I felt safe to reveal sensitive experiences and parts of myself.

I came away from my coaching experience with a feeling of support, significant new insight about a core belief that was holding me back, and the ability through naming/working with that belief to have some real shifts. 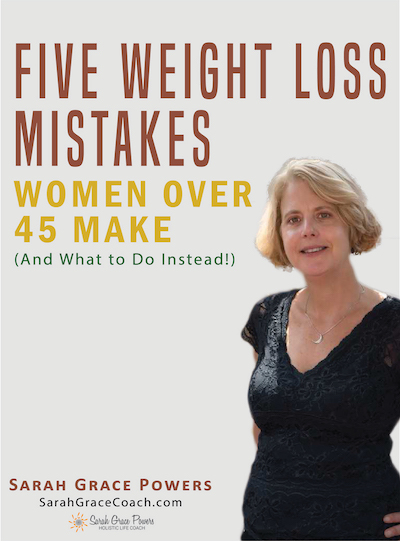 Why not sign up for email updates?
You’ll receive the latest inspiration on living light, ageless and free.
Plus you’ll get a copy of my free E-book,
Five Weight Loss Mistakes Women Over 45 Make
(and what to do instead!)

Wouldn’t you love to rewrite that old tape in your head
that keeps telling you it’s too late?

Are you ready to learn how to choose YOU? To make healthy and loving choices for your body and your spirit?

Get started now by signing up for free updates.
Inspiration and practical tips direct to your in-box each week.

One of my core values is FUN… and here I live my life, and practice my coaching, with an intention of finding the joy and fun available to me and to all of us during this transitional phase of life.

Click here to read more of my story of reinvention

How the heck did I end up here in Mexico? What happened to my safe and comfortable life? The Universe works in mysterious ways…

What you are reading here on this website is the latest iteration of my creative response to what I am called to do in the world.

Several years ago, at age 50, I created Holistic Hot Sauce, a website I now consider to be the birthplace of this “Reinvention Incubator.”

My vision was to create a resource for women who are struggling with menopause and the emotional angst around growing older in our youth-worshipping culture.

At the time I was riding the tidal wave of menopause and feeling the primal power surge of energy that brought. Physically, emotionally, spiritually.

But… there was more going on.

See, as I woke in the night kicking off those sweaty sheets, I kept getting the feeling something was off.

Have you ever had a niggling sensation that you’re hiding from some essential truth?

I had a good life, nothing really wrong. Except deep in my heart I knew I wasn’t being true to who I truly am. I had no idea what to this meant. I was scared to death to imagine leaving the comfortable existence I had so carefully cultivated. I’d left my troubled childhood behind, and now I had plentiful friends, a nice home, a well-meaning husband, respect in my community.

All that was about to change. The Universe was calling me to a serious life reinvention.

This wasn’t my first rodeo with finding the courage to take a big leap. In my early 40s, I’d argued mightily with the Universe when I began getting the messages it was time to leave my career as owner of a successful shop and healing center.

Arguing with the Universe

In fact, I had to get hit on the head with the proverbial 2X4 to take THAT leap.

Once I did I never looked back.

Years later, soon after turning 50, as I hiked alone in an ancient forest, my mind yammered away with the same old, same old…when I suddenly found myself on my knees in tears.

For the first time in my life I heard the voice of my guidance loud and clear! No matter how much I argued or came up with excuses, there it was.

As the tears flowed, I suddenly knew that I was to take a huge leap into the unknown.

In a few short weeks I’d packed up whatever possessions would fit in my little car and moved to another state, leaving a 22-year marriage and many deep connections.

I wish I could say it was all smooth sailing after that.

But, umm no. Not exactly.

I left a tiny, though progressive, rural community in the redwoods where everyone knew me and moved to a large, city—Portland, Oregon—where I knew barely anyone.

With my meager savings, I rented ‘daylight’ basement room, where I set up shop for my new digital business.

I spent my 51st birthday sitting in a restaurant alone, toasting myself.

In the months that followed I went through many boxes of tissues.

Waking at 3 am, feeling like I was jumping out of my skin, after dreaming of my grown daughters being little girls again…and then realizing that actually I was all alone in a strange bed with my regrets.

I emerged seemingly unscathed from life-threatening car accident, only to discover a month later that my body had been seriously compromised. My 30-year exercise habit came to screeching halt.

As my savings dwindled I kept up a good face, but things weren’t looking good.

Yet, here’s what did happen:

Slowly, I began to open, soften. I began my deep dive down what I jokingly call the ‘woo-woo rabbit hole’, opening my channels to the divine guidance that I’d been too busy and preoccupied to listen to previously.

Although only a few short years before I would have rolled my eyes at the term ‘life coach’, I became obsessed with becoming a life coach.

I had spent a couple of decades of my early adulthood owning and operating Moonrise Herbs, an herb shop that doubled as a community healing center and spiritual bookstore.

I still loved natural remedies, but now I wanted to dive underneath.

To find out why these remedies just didn’t work for some people, and why even when a person had the best intentions, they just wouldn’t (or couldn’t) follow a healing protocol with herbs and diet.

I realized I felt way more passion about exploring and understanding the emotional underpinnings of the pain and discomfort of menopause.

Although I will always love (and utilize) the world of plants and herbs, personal and spiritual growth became far more compelling, and became central to my coaching practice.

I trained with Martha Beck over the course of eight months …. An experience that turned me inside out and back again, rewiring everything I thought I knew, and most likely saving me from utter despair. (I joke that my coach training was better than 10 years of therapy!)

After a lifetime of living almost exclusively in my head I began to listen to my heart.

Instead of losing myself in analysis about every little step, I began following breadcrumbs.

One of those breadcrumbs was an opportunity to spend several months in Mexico. A chance to achieve a long-held dream of living abroad for an extended period of time.

That led to more breadcrumbs.

It was time to lighten up some more!

After four months in the central highlands of Mexico, I went back to Portland, sold most of my (now already meager) belongings, and moved here to San Miguel de Allende.

Now I’m teaching workshops and coaching fascinating expats from all walks of life. Every day I see people I would never have met had I stayed in my safe and comfortable little world in the redwoods.

I’ve connected with ‘soul sisters’ who will be friends for life.

Then, one evening, about a year after landing here, my eyes met the blue eyes of a tall stranger. I didn’t know it yet, but I was about to embark on a romance and partnership that has brought so much joy and so much new growth.

And the adventure continues to unfold. 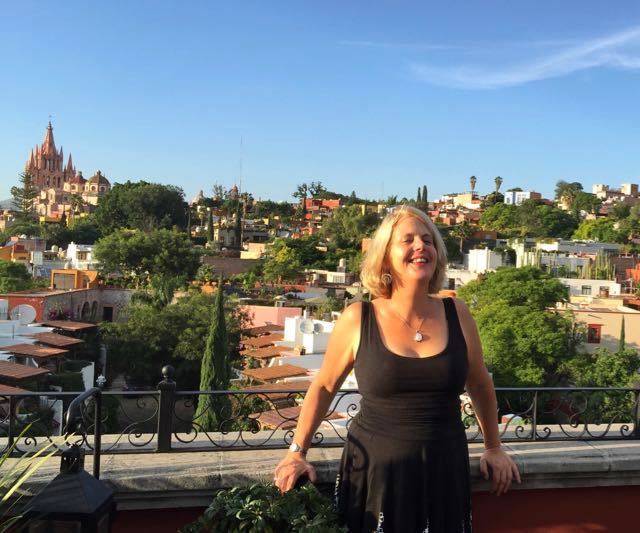 It’s time to kick the thought “It’s too late” to the curb,
to chase those dreams that are digging a hole in your soul!

Only you can offer the world your particular brilliance, your radiance.

All you need to do is show up.

We are the ones we’ve been waiting for. the time is now. the energy is here. the power is within the present moment.