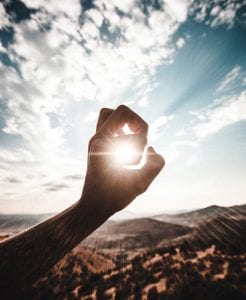 I love to plug into the magic of nature and the seasons, and so much of this magic is available to us during key points in the year:  the Solstices, the Equinoxes, and the “Cross-Quarter Days” that happen in between.

Here in the Northern Hemisphere the Solstice is the start of our summer, and it is the peak of the long days.

Solstice lends its energy to your intention to release what no longer serves you in your life. So today, take some time to allow yourself some release. Let it go so you can let in what wants to be born!

For those of you that are ‘fact-finders’ or simply curious to know more about the history and lore of Summer Solstice, I thought I’d share on the blog today an article I wrote eons ago.

Mother Nature’s abundant generosity shines most visibly right now as the sun climbs to its highest peak at the Summer Solstice. Yes, the wheel of the year is turning and even as we look forward to a long summer of plentiful produce, the days will now slowly grow shorter as the sun begins its journey away from the earth.

The word, “Solstice” is derived from two Latin words: “sol” meaning sun, and “sistere” to cause to stand still. This is because, on the day of the Solstice, the sun rises only a barely perceptible amount further northeast, compared to the day before. In this sense, it “stands still.”

Peoples throughout the northern hemisphere have always celebrated, partied, and honored the power of the sun at this time. Solstice rituals are varied and rich, and it is only in our hectic modern world that many people have begun to virtually ignore such important turning points in nature.

Sure, we might acknowledge them, telling each other “today is the first day of summer,” but most of us don’t participate in the elaborate rituals of celebration and letting go that our ancestors enjoyed.

Although the Summer Solstice is officially the first day of the summer season, it is traditionally referred to as “Midsummer,” because it falls right in the middle of the growing season.

It is a night known for mysterious and magical hijinks, the fairies are out at play doing their best to confound us humans. We find accounts of this in many poems and stories, most notably in Shakespeare’s Midsummer Night’s Dream.

Of course, the most famous Summer Solstice sunrise is at Stonehenge, on the Wiltshire Downs in southern England. On most years, thousands of people gather at this sacred site to celebrate sunrise over the Heel Stone on the longest day of the year.

As with all the Pagan nature celebrations, the early Christians gave this holiday their own slant. The feast day of St. John the Baptist falls on June 24th and this became the accepted way to celebrate the summer solstice for Christians. Even now, St. John’s Day is considered to be the ideal time to harvest the herb named for this saint – St. John’s wort.

St. John’s day is offset a few days after the summer solstice, just as Christmas is fixed a few days after the winter solstice. Christians celebrated St. John’s Day in much the same way that pagans honored the Solstice for thousands of years. They built fires outdoors and burned that which was old and worn out. But they added Christian elements such as praying the rosary while walking clockwise around the fire.

European Pagans celebrated the Summer Solstice with similar rituals as the Beltane May festivities, but the energy and intent was deeper and more serious. A common pagan name for this festival is “Litha,” a word believed to have Saxon roots.

People across the British Isles would journey to sacred sites such as standing stones and sacred springs for Midsummer gatherings. This was a night of fire festivals and of love magic, of love oracles and divination. Pairs of lovers would jump through the flames in the belief that the crops would grow as high as the couples were able to jump. (I don’t recommend trying this at home!)

The ancients built the bonfires to generate sympathetic magic: giving a boost to the sun’s energy so that it would remain strong throughout the rest of the growing season and guarantee a plentiful harvest. The Mother Goddess was viewed as heavily pregnant with the fruits of the coming harvest, and the God, at the apex of his manhood, was honored in his guise as the supreme sun.

In old Europe, the full moon in June was often called the Honey Moon. June was considered to be the best time to harvest honey from the hives.  This time of year, between the planting and harvesting of the crops, was the traditional month for weddings.

June was favored because many ancient peoples believed that the union of the Goddess and God occurred in early May at Beltane. Since it was unlucky to compete with the deities, couples delayed their weddings until June. This old belief is most likely why June remains a favorite month for weddings to this day. This tradition also lives on in the name given to the couple’s vacation immediately after the ceremony: The Honeymoon.

Summer Solstice holds an element of the bittersweet. Although all around us we see abundance and beauty, and although we treasure the sweet summer days, we also know that the dark time of the year will inevitably draw closer and closer.

For this reason, this holiday is a time of letting go, and many rituals include making effigies and wicker sculptures, decorating them with flowers, and then burning them in the Solstice fires.

In the spirit of letting go, this is a great time to give things away. This week when the summer sun rides highest in the sky is the peak of our expressive and expansive selves. Celebrate what you have achieved and manifested this year.

We can use the energy of the Summer Solstice to focus our intentions and charge them with healing and positive affirmations of all that we wish to be.

they do bonfires make,

run leaping over the same.

The women and maidens

together do couple their hands.

they dance a round;

no malice among them stands.”