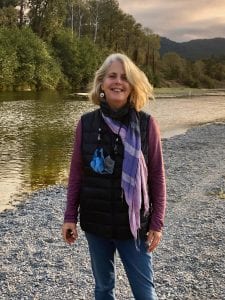 Two years ago this month I was in the middle of a big breakup with the man I had thought was The One.. and I was also in the throes of one of the biggest breakthroughs of my life.

I was well on my way to the ‘right weight’ body I had always longed for.

And now a couple of years later, I don’t even have the faintest worry that I will gain the weight back.

Decades of mind drama. Just over.

Because this time around my success was based on what I was BELIEVING about myself… much, much MUCH more than what I was actually doing to drop the weight.

Sure, I was doing things. I’d made some adjustments to what I consumed on a regular basis. I had an entirely new approach to exercise.

Yet the part that made the difference was that I was becoming someone different.

Someone who no longer believes she’s deprived if she thinks she can’t pop into the coffee shop across the street for one of those yummy almond croissants (because come ON, they just came out of the oven!)

How did I stop obsessing all the time about food, my body, the unfairness of my body’s apparent rejection of some of my favorites, all of it?

How did i manage to not slip back into the alluring comfort of overeating and over drinking during the shit show that was 2020?

A little more than 2 years ago I never would have thought this was possible!

I believed I’d tried it all…. and that it always worked for a while, until it stopped working.

But then around the beginning of 2019 I made a decision.

I was finally done with crapping all over myself every time I looked in the mirror at my puffy body. I was tired of bemoaning how I didn’t know what to do with this menopausal weight. How it had just showed up out of nowhere.

I was sick and tired of my own excuses for not making the changes I knew I needed to make in my own life. (Including losing the boyfriend).

But I also knew that another diet was not the answer. I wouldn’t stick with it and I would end up right back where I started. Even a healthy cleanse wouldn’t work on its own. There had to be something more.

Something had to change on a deeper level.

It was time to step up and put together the tools I’d learned from life coaching, the effectiveness of EFT, and all of my knowledge about herbs, supplements and preventative health. Time to get serious in my study and research on hormones and weight loss for women in the menopausal years.

It was TIME for me to put all this together so I could pull myself out of this quagmire of self loathing and helplessness!

And that’s what I did. And 30 pounds of emotional and physical weight melted off my body and my aura.

I didn’t expect to lose quite that much, but the weight just kept dropping off once I’d obliterated those mental blocks that had me wanting to hit that bakery up every time I walked by.

Now I weigh less than I have since I was around 16 years old!

But what was even more important was the lightness I felt in my Spirit! That sense of ownership of ME and my own choices.

That’s when I knew I wanted to help other women like me do what I did. Because if my stubborn, rebellious self could do it, anyone could!

I broke down everything I did and created the simple steps that make up the Menopausal Weight Release Solution, my signature weight loss coaching program.

Next week – on Tuesday, the 20th – I’ll be sharing three of the most essential steps to reshape your body in my free Zoom workshop. These are the very foundations I worked from to create my new body freedom. And food freedom.

You want to be there!

(Reading this after that date? No worries! Simply sign up for updates and you’ll be the first to here about the next class.)