Happy New World. What Next? 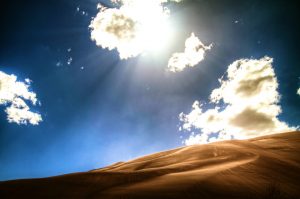 Were you almost disappointed that the world didn’t end on 12/21 as supposedly predicted by the Mayans?

After all, now you still have to pay off that credit card debt, make those decisions about your life direction, continue to clean the house and take care of your multitudinous obligations.

A bit tongue-in-cheek of course, but I have heard a conversations like this.

Of course most of us knew that the ‘end of the world’ prediction was really more about a transition into a new world. That’s why I heard the greeting “Happy New World” more than once during the past couple of weeks.

I like it. Happy New World. A New Year, a New World.

New age mumbo jumbo aside, there’s no arguing that 2012 was a difficult year for many. Now that we’re done with all of that end of the world stuff it does feel like a shift has occurred. 2013 is ripe with potential.

Every day, every hour even, represents a new opportunity. Even so, there’s something about hanging up a new calendar that makes a fresh start seem more real, more attainable.

Yet we all know whither those new year’s resolutions often go.

We’re already a third of the way into January, so perhaps yours (if you still make them) have already begun to drift.

How can we make the most of the psychological potential of a new year without deluding ourselves with a bunch of unattainable resolutions?

If, like me, you’ve always been an all or nothing type, you might be struggling with this.

What does work is thinking small.

What? That sounds so counter-intuitive.

I don’t mean never think big. Your grand vision is important and deserves its place.

But when it comes to taking action to attain that vision it’s time to dial it back into the smallest possible steps you can imagine.

And then break them down some more.

Here’s the other thing that works:  Forgive yourself.

So you didn’t make it to the gym six days last week, despite the firm intention you set on January 1st.

Forgive. And move on. It’s okay. Go to the gym tomorrow.

One of the hugest ways we sabotage ourselves and our own intentions is by assuming we’ve totally blown it and there’s no point in even trying anymore once we take one little misstep.

Believe me, I’ve been there, done that. And still doing it. That’s why I write about it. To remind myself again and again.

A Different Swipe At Yearly Planning

And then there’s us overwhelmed/lazy/still-figuring-this-stuff-out types who get caught on December 31st wondering what’s next.

In past years my Decembers have been chock full of obligations both real and imagined, as well as a serious amount of partying. Which I loved. And which did not leave me much time for reviewing and goal-setting.

This year was different however; in the early weeks of December (inspired by the Reset Revive Restart program) I took a little time to reflect on the successes and challenges of the last year and to set intentions.

I chose a different tack this time though.

My MO in the past was to consider all that was left undone in the previous 12 months, berate myself intensively for my failures, and then imagine a future where I became completely organized, efficient, full of purpose and able to execute numerous huge goals – including losing weight, making a far larger income, giving generously, always being available and of service to those in need, getting much fitter, and on and on and on…

These weren’t so much New Year’s resolutions (I gave up on those before I even reached adulthood I think.) They were more like promises to finally be that person I imagined myself to be. To fulfill that potential I could feel in myself.

I’ve realized my biggest accomplishment last year was beginning (just beginning, mind you) to accept the person I actually am.

To accept her, and even to love her. As she is:  often disorganized and scattered, sometimes lazy, always loving, always seeking love, and – yes, full of potential.

Last year I began to forgive myself for the ungrasped opportunities, the times I didn’t push a bit harder, the times I gave in to fear. Last year I walked into the discomfort and fear and made some gigantic life changes. And I’m still in the midst of that whirling vortex of change.

No longer cradled in the secure cocoon of family and community I am untethered and free – a condition I have longed for and feared simultaneously. And now that it’s here I alternate between elation and paralyzing terror.

Despite my new insights, as December advanced and I prepared for holiday travel, the panic started rising. I still had no list of clear goals for 2013. How would I find time to pull all this together while celebrating with family and old friends?

After all, I wanted to hit the ground running, goals firmly in place, on January 1.

A chance email alerted me to a Solstice (12/21/12!) celebration/ritual for women  in Oakland, California – on the very night I’d be arriving there on the first leg of my journey. What a lovely way to spend Solstice with my sister I thought, and I signed us both up.

Alas, a snowstorm prevented me from arriving in time to attend the event live. But we tuned in via the internet. So not the same!

Yet…. (and yes, there is a point to this digression), despite the spotty streaming and distractions in her home I gleaned one important nugget. It comes from Native American wisdom and has to do with the month of January.

Contrary to the common idea that January 1st is the time to dive into all your huge new projects, to power ahead full bore – they advanced the notion that January is a month of frozen tundra, of hibernation, of rest and regeneration.

January is a time when all those exciting projects are incubating before they unfurl and burst into bloom in the coming months.

I can’t tell you what relief I felt listening to this different take on the whole ‘start January off with a bang hype’.

And that relief grew as I progressed through the rest of December and found that I could barely scrap together 15 minutes for myself, much less a yearly planning session.

Now this doesn’t mean that you shouldn’t go ahead and move forward on your own projects if they are ready to come out of incubation.

But if your ideas are still in that fragile, developmental stage – no stress. Let January be a time of turning within, of gently cultivating that tiny flame. Freewrite. Brainstorm. Take walks on the frozen trails. Sleep. Dream.

And if you didn’t get to it in December, January is a great time for review:  sorting, organizing what’s past so you can make room for the opportunities, plans and projects awaiting you this year.

What does your January look like? Are you in incubation mode? Or a you cruising forward with confidence toward fulfilling your dreams for 2013? Are you a planner, or an allower? Share your thoughts and visions in the comment section.