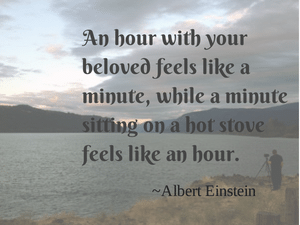 Where does all the time go?

I’m running out of time!

If only I had more time!

Oh, I wish I had time for that!

There’s just not enough time to get it all done..

How many of those statements have you uttered in the last week? In the last hour?

As a culture we’ve pitched ourselves in a ferocious battle against Time. Time is the enemy, the thing that keeps eluding us, teasing us. We desperately scramble to find ways to slow it down, speed it up, harness it to our will.

And  yet, the minutes, hours, days and weeks continue to slip by. Adding up to the stuff that makes up a life. The tighter we grasp on the more quickly it seems to tumble past.

What is this thing we call time, and why have we positioned it as an enemy to be tamed?

I’ve personally fought the good fight with the big T for my entire adult life. Being a person of multiple interests and passions, my mind envisions far more pursuits for this earthly body than I manage to squeeze into the continuum we call Time.

Recently though I’ve begun to question whether my approach is working. (You’d think I might have grokked onto this sooner – what’s that old saying about the definition of insanity? When you continue to do the same thing that isn’t working….)

Constant hand wringing about Time’s malicious way of slipping by way too fast definitely hasn’t been working for me!

Nor does jumping on the bandwagon with everybody else to complain about how there’s ‘no time.’

Because guess what? The more I say ‘there’s not enough time,’ the less time I seem to have!

The main premise of this amazing book (I suggest you get it and read it at your earliest convenience!) is about achieving fabulous success by living life in your ‘zone of genius’ – as opposed to your zone of competence or even excellence. Another important concept the book puts forward is  our ‘Upper Limit’, and how we subconsicously but quite deliberately hold ourselves back from experiencing full-on, no-holds- barred joy and bliss.

But that’s all the subject of another blog. Fascinating stuff!

The chapter that’s got me going on this time thing comes near the end. It’s called “Einstein Time,” and it’s a completely new take on that old bugaboo.

One of my spiritual teachers, Heather Strang, introduced me to a similar concept months ago – calling it “Vertical Time.” I’ve been playing with this – wanting desperately to believe it’s possible to actually STRETCH TIME.

But Binnie, my inner critic, has been scoffing at this idea as a bunch of woo woo nonsense. (She can be a real judgmental bitch!)

Anyway, Gay Hendricks is talking about the same thing – but backing it up with some actual physics.

He claims he can work half as much and get twice as much done now that he understands the secret of Einstein Time! And he’s not the first person I’ve heard make this claim – although others (one of my favorites being Jill Farmer) don’t attribute it to “Einstein Time” in particular, but rather to developing a completely new relationship with Time itself.

Now I’m just an infant with this stuff  – but … as I said, ready to try something different with how I relate to Time.

“When you make the shift to Einstein Time, you experience a major surge in your productivity, creativity and enjoyment. The shift takes place the moment you embrace one profoundly simple truth:  You’re where time comes from,” says Hendricks.

I know, that’s what I said too.

The problem, Hendricks argues, is that we’ve been viewing the concept of Time in an outmoded Newtonian model. In this paradigm, there’s a finite amount of time that must be carefully portioned out. It assumes there’s a scarcity of time, and this creates that urgent, panicked feeling.

Hendricks says that the Newtonian time scarcity mindset is just a stage we’re passing through in our evolution as humans, just as Newtonian physics was a stage we passed through before Einstein’s breakthrough.

Apparently Einstein has a famous quote (one I somehow missed): “An hour with your beloved feels like a minute; a minute on a hot stove feels like an hour.”

Just like anything, Time is simply what we decide to believe it is.

Everyone gets the same 24 hours – and you’d better believe that the people who get shit done aren’t spending too many of them lamenting about the fleeting nature of time! No! They’re too busy getting on with what’s important to them.

Sitting by the river, smelling roses, taking walks, cuddling on the couch…. all of these are super important and valuable ways to spend our time.

What if, just as an experiment, we tried to look at time as a friend rather than the Enemy.

What if we stopped talking about her with words of scarcity.

Time (and money!) respond to our words, our overtures. It’s a relationship.

Think about a relationship with a friend or a lover. If you constantly speak about your fear of them leaving, or worry you won’t get enough of them, or cling to them –they move away. But if you are relaxed , enjoying the connection in a non-graspy way, they come closer and your relationship deepens.

So here’s the challenge:

Notice when you use phrases of scarcity when speaking about time. Consciously reframe the words – into a sentence that does not take away your power and control. Keep it believable. The key is to own what is happening in your own life.

For example, instead of ‘there’s not enough time,’ you could try something like, ‘how can I tackle this task in a stress-free way? Do I need to break it into smaller chunks?’

Notice when you use the ‘no time’ riff as a way to get out of something you don’t want to do.

Because noticing is the first step to changing a habit that’s taken a lifetime to build.

I’m going to give this a try. Are you with me?

It won’t be easy to swim upstream against a lifetime of talking a certain way. But what the heck? Methinks the rewards could far outweigh the initial discomfort!

There’s so much power in our words! Especially the ones we say in our own minds.

Let’s report back in the comments! Or Over on the FB page.

For a fun listen on a new approach to time (and more ideas on reframing those scarcity thoughts), check out this podcast of Jill Farmer being interviewed on How She Really Does it.