When ‘Can’t’ Turns Into ‘Can’: A Road Trip And A Revelation 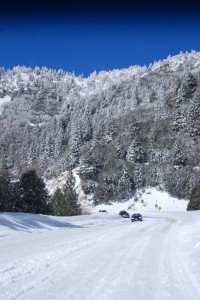 I’d been on the road only 10 minutes when the downpour turned to feather-like snowflakes.

Usually I get excited when I see the white stuff.

Except when I’m behind the wheel.

See, I never really learned how to maneuver a vehicle through snow and ice. I’ve spent the last 30 years on the Pacific Coast where snow days are nonexistent.

But on this December day I’m far from the coast. I’m traveling Interstate highway 5 from Medford, Oregon to San Francisco, and I have two mountain passes to climb.

I’d put in my order with Mother Nature – NO SNOW on Thursday – and I was counting on her complying with my wishes.

So much so that I blew off buying chains before I left Portland.

But I’d been told that they checked for chains if it was snowing, and I might be turned back at Mt. Ashland if I attempted to breeze through without these things.

The flakes thickened as I approached the town of Ashland, so I pulled off the highway where thankfully a gas station awaited with a big sign, “We Have Chains.”

Those who live in snowy climes or regularly traverse mountainous roads in winter may wonder why this seemed like such a big deal to me. Well, that’s the downside of living outside the snow zone – you never learn how to do this stuff.

The grizzled man at the cash register was genial.

“Umm, you have chains here?” My voice wavered a bit.

He grinned widely, “We sure do!”

I guess he took one look at my non-snow-ready apparel and concluded I was another one of those clueless city slicker types who didn’t know how to put on the chains.

Seeing my look of dread and confusion as he instructed me on their use, he smiled.

“Don’t worry,” he reassured me. “They have guys up there that can help you put them on.”

Relief flooded through me. There’d be someone to help! Because  frankly the instructions he’d given me sounded like so much gobbledygook.

And maybe it would quit snowing by the time I got up there anyway.

Uh, yeah, sure. I began to climb within five minutes of being back on the road.

Up and up I climbed while the huge, sticky flakes swirled around me. I gripped the wheel and leaned forward.

Heads bent, they crouched down beside their cars.

Maybe someone will stop me to see if I have chains, I thought. And then I can ask them to help me get the damn things on.

Snow swirled thicker and thicker, obscuring all but the few feet of road in front of me. Now it was sticking and piling up on the asphalt. 18-wheelers clung to the shoulders, lines of them pulled over and chaining up.

The car was starting to slide a little now. Shit, I’m going to have to put those chains on for sure.

Where are those fabled guys??

I was approaching the summit, the car skidded some more. A sign read “12% downhill grade”

Well, fuck. This was it. No one was going to stop me from a death wish apparently.  I knew I’d be nuts to drive down this snowy mountain in my little Nissan without chains.

A car pulled over in front of me. I pulled behind. Another 18-wheeler pulled in front of her.

A woman emerged, crouched down against the swirling flakes, and bent in front of her right tire.

I unzipped the bag and pulled out the chains, the directions, and some sort of mysterious cable that I imagined must be for tightening. I squinted at the tiny type on the paper.

Now, I consider myself reasonably intelligent, but for some reason mechanical directions never fail to confound me. It’s like it’s another language.

I pulled on my stocking cap and stepped out of the car – damn, it was FREEZING.

“Can I watch you for a minute?” I asked the woman who crouched over her tire. “I don’t know how to put them on.”

Secretly I hoped she’d be a capable Good Samaritan type who would say, “Oh, don’t worry – as soon as I get these on I’ll come and put yours on for you.”

But I could see she was struggling herself – and that’s because she had a totally different sort of chains – those old fashioned ones that look like actual chains.

Disappointed, I said, “Oh, you have a different kind.”

“Yes, if you the newer ones, this won’t help.” she responded.

Back to my own mysterious chains I went.

Why, oh why hadn’t I put my boots on?? And where was my warm jacket? I was wearing a raincoat and clogs, and my only gloves were thin cotton, meant to keep the California chill off. Definitely unprepared for snow.

I squinted at the directions again as the wet snowflakes began to soak the paper.

Shivering I began to lay the chains over the tires. Tears began to form. Fuck, I’m freezing. And I don’t know how to do this!


A minute passed. Snow began to build up on the windshield.

Then a saner voice: “You CAN do this. You have to do this. Get out there and do it.”

With numbing fingers I wrapped the cold metal around the tire, fumbling to connect what seemed to be the clasp.

Somehow, even though the directions got so wet they ripped completely in half, I managed to get both sets of chains around my front tires. My rain jacket was filthy from lying in the dirty snow underneath the car, but the darn things were actually attached.

But what about tightening them? I stared at that weird cable in confusion.

While I struggled to fasten the second chain, the woman approached me. “Did you get them on?”

A good Samaritan after all, she checked them and assured me they were on correctly. “I tightened this one a bit,” she said. “But be sure to check and tighten them after driving a mile.”

By now I couldn’t even feel my fingers, I was soaked. Better get moving before I’m stuck here on the side of the road. The snow was flying thick and fast.

Slowly, following their taillights through the whiteness, I continued on what no longer resembled the highway I knew.

The heater blasted and my fingers began to thaw.

I put chains on my tires! Wimpy old me actually managed it!

A little thing – but one I’d perceived I ‘couldn’t’ do.

Hiding inside that car, so unwilling to push through my own resistance, I found something inside me I didn’t know was there.

And in that moment – all that self-help advice about how anyone can do anything they really want to do  – well it suddenly made sense. If I don’t have to remain wimpy girl who can’t put chains on, I don’t have to be the person that ‘can’t’ do so many other things.

I can forgive myself.

I can rewrite my overwhelm story.

I can practice self-care and creative incubation without flogging myself with guilt over the ‘lost’ productive hours.

I don’t have to keep the chains on me.

How about you? Is there something that you’re sure you can’t do?

Because an action as relatively insignificant as putting chains on your tires isn’t really that different from the big stuff.

Like – starting that exercise program you keep thinking about. Or approaching that attractive person you’ve been wanting to get to know. Or speaking up to the boss. Or quitting.

Maybe all those reasons that you ‘can’t’ do it, aren’t really reasons at all.

Share your story in the comments! What perceived ‘can’ts’ are limiting you? Or…. what have you found out that you CAN do after all?